At the beginning of 2019 when FRAMO presented the first test version of its e-truck in Düsseldorf to the Ministry of Economic Affairs for the federal state of North Rhine-Westphalia, the electric Green Last Mile (eGLM) INTERREG project had been under way for 18 months. On 23 October 2019, after a beautiful summer, FRAMO delivered its first e-truck to MAN Venlo for their customer, Meulenberg Transport. Is it time now for a midterm review about this ground-breaking project? 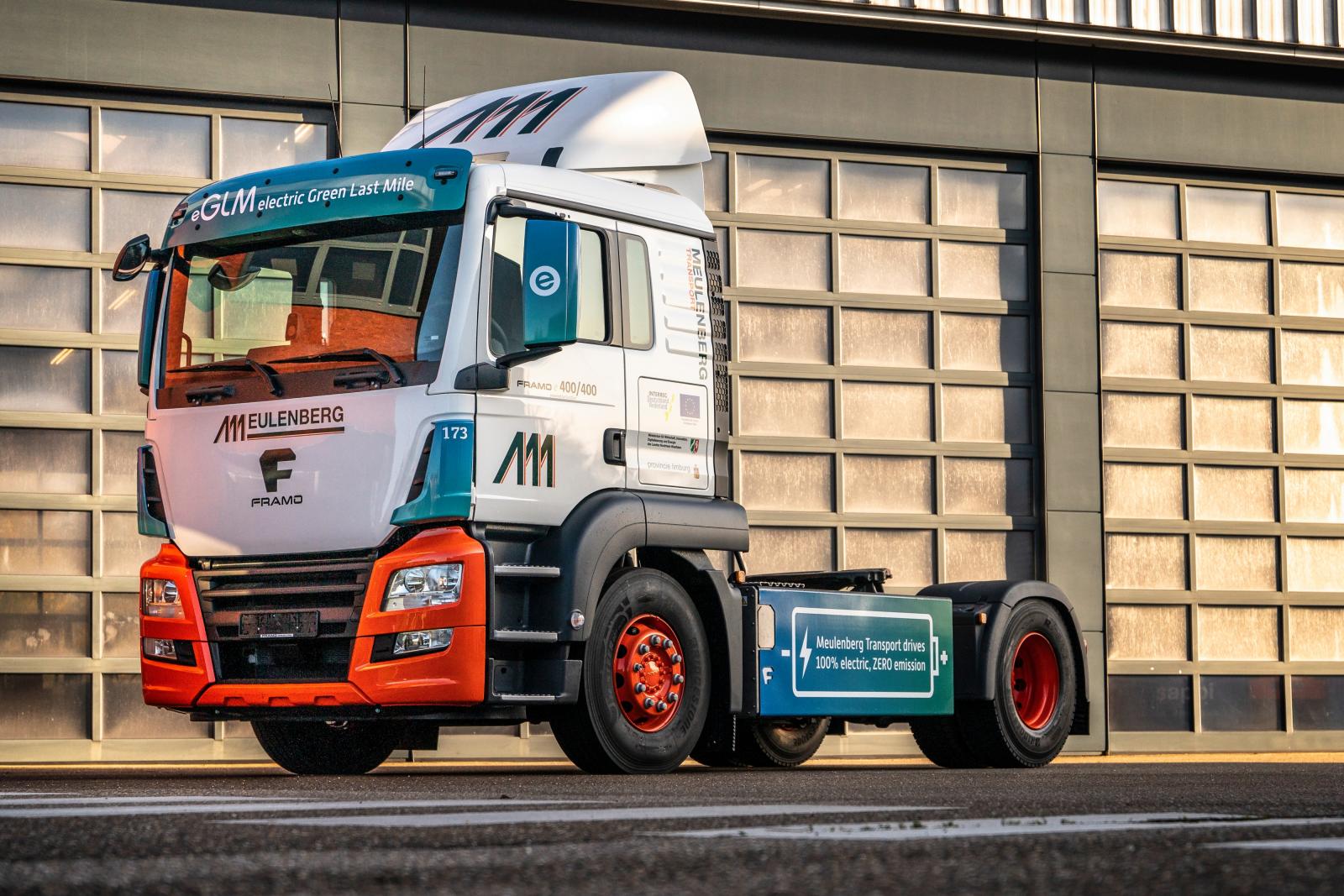 Let’s start with a brief outline. Never before in Europe were so many (7) e-trucks purchased at the same time by so many (6) companies distributed between two countries and put into normal everyday operation.

The facts regarding the characteristics of these e-trucks don’t lie either. A 345-kWh battery pack (third generation) provides a minimum range of 150 kilometres but that will probably be more in practice. The peak torque of 11,000 Nm is fantastic. The truck is ready to roll again after just little over 30 minutes of charging which is still well within the legally required break time for drivers. These are unheard-of figures in the world of transport.

Except for a few familiar ‘lone wolves’, e-trucks are still a rare sight on Dutch and German roads. As yet, they aren’t being mass-produced. This is why eGLM wants to launch their implementation on a larger scale and on various fronts simultaneously: ultra-fast charging infrastructure, everything involving the mains supply, the operating process andthe cooperation among companies, knowledge institutions and international authorities. In short, the challenges of using e-vehicles in the transport sector together with the important conditions specified by this Dutch-German INTERREG project: a 5.2 million euro project with a 4-year deadline.

During this stage of development, the use of electric vehicles in the transport sector has nothing to do with which brand of truck is being purchased. It’s more about how the total supply chain can be developed. When it comes to the playing field for electric heavy transport vehicles, nothing is settled yet. This is making eGLM a pioneer in Europe: a project attempting to pave the way towards a fully green transport sector. (Promoting it, you might say.)

The driver is an important link in the entire process. This is why six weeks were set aside for test driving the test version. Every driver started out on diesel and knows the power and agility of six cylinders. What’s interesting is that even the most powerful diesels at peak power have only about a quarter of this eGLM truck’s Nm peak. This was also one of the most frequent remarks made by the drivers who test drove them during the test weeks: ‘a lotof torque’. They also praised its handling (‘great, quick response, no difference between the best diesel’) and the fact that the e-truck is really quiet, especially at low speeds.

They also really appreciated the EV’s one-pedal drive. No more shifting: lift one foot to decelerate and brake almost to a stop. ‘You’ll get used to it by the time you get to end of the industrial park. After that, you can sit back and relax’, said one of the drivers.

It isn’t hard to do the math. A very heavy vehicle also needs a big heavy battery pack: how can this work? Well, it’s nice to know that it can - and even a lot better than you might think. FRAMO loads a third-generation 345 kWh battery pack into its e-truck. The project will provide 300 kW quick chargers and 50 kW night/destination chargers. Ergo: you’ll never be rolling on empty (just like you wouldn’t in a diesel) since it only takes 30 to 45 minutes to get from almost E to F. While stopped for loading or unloading, you simply hook up to a destination charger.

Interestingly enough, this kind of ultrafast charging for heavy duty vehicles didn’t even exist prior to the eGLM project. In other words, this project is opening a new door to the acceptance of electric heavy transport vehicles. It’s actually doing something that many are still trying to prevent: being able to use high-charge current to recharge at locations wherever it’s needed 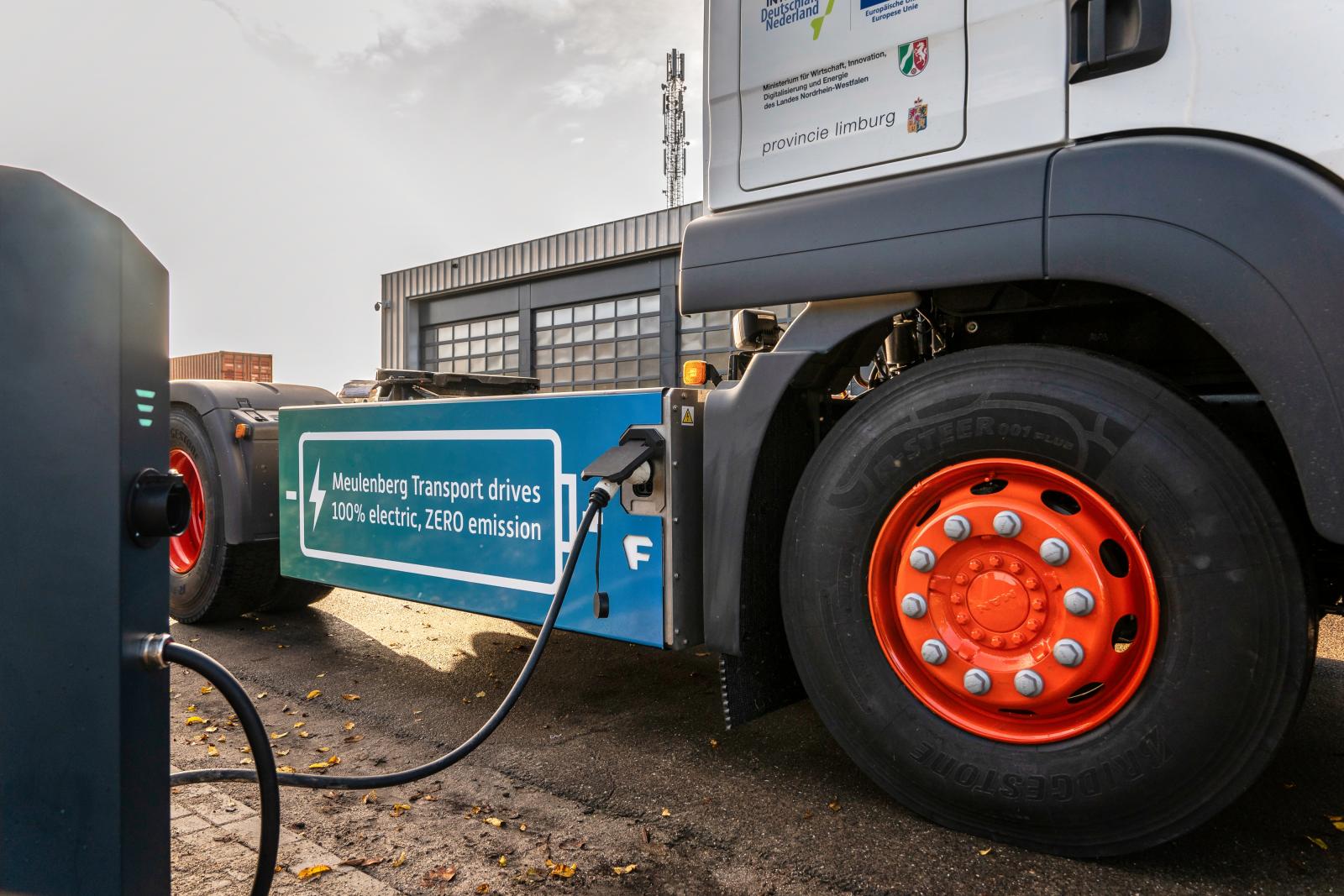 Also directly proportional to the substantial innovation challenges – both technical and organisational – are the costs. Under normal market conditions, the costs for a 44-ton e-truck with a range of more than 150 kilometres would still be unfeasible. So, besides the private sector investments, the EU INTERREG subsidy is essential. Roughly speaking, the purchase costs for an e-truck are four times more than for a conventional vehicle, and this figure is about the same for the charging infrastructure if there isn’t any basic infrastructure worth mentioning. (Consider charging stations themselves, changes to the power grid, transformers, etc.)

The reason for these higher costs is due to the simple fact that issues surrounding this form of sustainable transport, including the entire supply chain, have never been addressed before. This is the first time it’s being done at this scale. Competing companies are sharing in the costs and sticking their necks out for the good of the sector. After all, something that’s wanted but doesn’t exist has to be invented. This may cost money now but it should yield benefits for the whole sector later on.

Complexity in the form of previously unknown phenomena

Transport companies have heard it all before: customers screaming for them to make their services more sustainable. People are even getting impatient. So, what can you do? After all, there’s nothing yet on the market that can respond to what these customers want. This is why the six companies participating in eGLM have joined forces together with government agencies in this Dutch-German INTERREG programme.

A major part of the challenge involves the charging infrastructure. A: 300 kW ultrafast charging for heavy duty vehicles doesn’t exist yet. B: the plethora of parties and interests involved: municipalities, provinces, grid operators, power companies, land owners, suppliers, legal experts, business interests. Innovating isn’t easy in an environment where existing interests have been established for years. And yet, we have to go forward. Sustainability is a must, so we need a radical rethink. The resulting complexity is something that eGLM wants to solve and pass on these solutions to the transport market that’s demanding more sustainability. There’s no other way out.

Companies in the ultra-competitive transport market are always battling it out. But here, of all places, we see competitors joining hands. This is unique, but could it also be a sign of things to come? An important conclusion to be drawn from eGLM so far is that the issue of sustainability is actually bringing competitors closer together. After all, it’s putting money towards an innovative aspect of the market deemed impossible before. It’s providing a stronger position in the market and better conditions for contracts. Customers are demanding it, too, so both large and small companies can take these steps as equal partners with a common goal of improving their sustainability and being intrinsically in their social and commercial interests.